FROM THE MAYO CLINIC!

LEARN ABOUT NEW CONTINUOUS CPR to save lives!
Posted by Ivan Berkowitz at 10:12 AM No comments:

Former President Bill Clinton underwent a successful heart procedure on Thursday at the Columbia campus of New York Presbyterian Hospital. Clinton was treated for symptoms of chest discomfort that he had experienced over the past several days, according to his cardiologist, Dr. Allan Schwartz.

After undergoing a battery of tests, Clinton received two stents in a coronary artery. The low-risk procedure involved inserting small metal mesh tubes into the artery to prop it open. The stents will remain within the artery permanently as scaffolding, allowing the vessel to stay open and accommodate blood flow. (See pictures of Clinton's North Korea rescue mission.)

"His prognosis is excellent," said Schwartz at a press conference on Thursday evening, adding that the former President was on his feet two hours after the hour-long procedure. "President Clinton has since been up and walking around and visiting with his family. He's in good spirits. We hope to have him go home tomorrow."

By Thursday evening, Clinton's daughter, Chelsea Clinton, was with him at the hospital, and his wife, Secretary of State Hillary Clinton, who learned of her husband's condition before a meeting with President Obama in the White House, had traveled from Washington to New York City.

Clinton underwent quadruple-bypass surgery in 2004 at New York Presbyterian Hospital. That procedure was also prompted by symptoms of chest pain. Doctors took blood vessels from elsewhere in his body and grafted them onto his heart to circumvent four blocked heart arteries. In 2005, the former President underwent another operation to remove scar tissue and fluid that had built up in his body — complications of the bypass procedure. (Watch a video about Bill Clinton and Haiti.)

On Thursday, a series of tests, including an angiogram, an electrocardiogram and blood tests, showed no evidence of heart attack or damage to the heart. However, one of the four bypass grafts Clinton received six years ago was completely blocked. Doctors stented one of Clinton's coronary arteries to increase blood flow to the heart.

Cardiac experts say that the blockage of grafted heart vessels is not unusual in bypass patients. Depending on whether the grafts are veins or arteries — the former being smaller and less flexible than the latter — blockage could occur as soon as five years or as late as 10 years following the initial surgery. Schwartz said the bypass graft that was blocked in Clinton's case has about a 10% to 20% failure rate at five to six years. (Comment on this story)

"It's important to remember that blocked blood vessels are not an event but a disease," says Dr. Clyde Yancy, president of the American Heart Association, who is not involved in Clinton's care but spoke in general about what to expect after bypass surgery. "We know blockages have their own natural history, and this just highlights the need to always be at the ready."

Clinton, 63, has spent much of the past several weeks in Haiti as the U.N. special envoy to that country, contributing to the relief efforts there after the catastrophic January earthquake. The former President has maintained a rigorous schedule since his bypass surgery, giving speeches, working with his global charitable foundation and accompanying his wife on the campaign trail during her own bid for President in 2008.

"This was not a result of either his lifestyle or his diet, which have been excellent," said Schwartz, referring to Clinton's procedure on Thursday. "His cholesterol numbers and other risk factors that we follow have all been excellent."

Even in patients who do everything right — eating a healthy diet, exercising and reducing stress to maintain heart health — new vessels can become blocked again, Yancy says, simply because heart disease is a progressive condition that is not cured by surgery. But it is that much more crucial for bypass patients to control risk factors, maintain healthy weight, lower cholesterol and blood pressure and not smoke in order to decrease the risk of future heart events. "This is a chronic condition," said Schwartz. "We don't have a cure."

Clinton's cardiologist emphasized that his patient was smart to respond promptly to the warning signals, like chest discomfort, that had been discussed in the past.

"The goal of this treatment is for President Clinton to resume his very active lifestyle," said Schwartz, who said he told Clinton he could go back to work on Monday. "It makes him less susceptible to future heart attacks."

Posted by Ivan Berkowitz at 4:51 PM No comments:

MEMORANDUM OF UNDERSTANDING between ISCTR and IACS 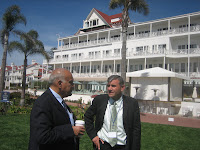 A Memorandum of Understanding has been developed by Jennifer L. Hall, Ph.D. Vice President, ISCTR and Ivan Berkowitz, MBA, Director of Development, IACS to define and clarify the relationship between the IACS and the ISCTR. The two groups share a vision and a commitment to research and education. In brief, they seek to work in cooperation to further the Mission outlined below and to work toward the objective of setting up a shared management for raising funds, delivery of services and building the long-term viability of fulfilling this mission. The leadership of the organizations agree to work together the next twelve months with a focus on implementing the following objectives that will serve to accomplish the broader goals listed above:

The goal is to establish research committees from both organizations to collaborate on research to help support the Mission. A goal will be for these committee members to work together to publish guidelines to move the field forward scientifically. The IACS and the ISCTR will work together in forming research committees each year to prioritize and review areas of focus - the committees will be formed in the fall, meet at the annual Summit Meeting in February, and have conference calls throughout the year to follow up.

Plans are being developed for a brain-storming session during the Annual Meetings of A C C in in March 2010.

Posted by Ivan Berkowitz at 5:06 PM No comments: